Lu Xinjian (1977) Studied graphic design and illustration in China and the Netherlands before establishing a career as an autonomous artist. Lu Xinjian works and lives in Sjanghai. He is fascinated by the structures and movements of growth of cities. With the help of google earth he  tries to map these cities with his own signs and code. In his monochrome paintings with rhythmic lines and symbols he tries to capture the dna of the cities that fascinate him. Recently Lu Xinjian was named one of the 10 most interesting young Chinese artists of the moment by auction house Christie's Asia. 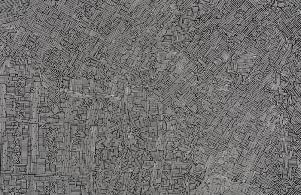